One of the oldest cities in the world!

Erebuni-Yerevan is 2803 years old. Yerevan is even older than the Eternal City - Rome and has about the same age as Babylon and the Assyrian city of Nineveh.

In 782 BC, Urartian King Argishti I founded the fortress-town Erebuni, present-day Yerevan, which became one of the most important administrative and economic centers of the country. The year of Erebuni foundation is accurately known from the survived cuneiform record inscribed on the stone slab. It says, “In the greatness of God Khaldi, Argishti, the son of King Menua, has built this impregnable fortress and called it Erebuni…" The name Yerevan comes from the name of the Erebuni fortress.

Yerevan has become one of the prosperous cities of the 21st century.

Yerevan is a large industrial city, the center of the social, political and cultural life of the Republic of Armenia.

The capital was built up according to a master plan developed in the mid-1920s by a great Armenian architect Alexander Tamanyan. The main ideas of A. Tamanyan were taken into account by the subsequent general plans for the development of Yerevan. According to A. Tamanyan's plan, the central part of Yerevan was to have a radial-circular layout, the old buildings of Yerevan (XIX century) and the existing main streets were preserved, the Republic Square was defined as the center. According to the project of A. Tamanyan, the building of the Government House was erected on this square, which became the dominant of the entire architectural appearance of the square. In the following decades the formation of the architectural ensemble of the main square of Yerevan was completed.

According to A. Tamanyan's projects, several more buildings have been erected in Yerevan, among which we will note, first of all, Armenian National Academic Theatre of Opera and Ballet named after Alexander Spendiaryan. The building was conceived by the architect as a structure with two large halls: an opera and a concert hall. The opera part was completed in 1939, the concert part (The Big Philharmonic Hall named after A. Khachaturian) - in 1963.

The majestic building of the Opera and Ballet Theater is located on Freedom Square. 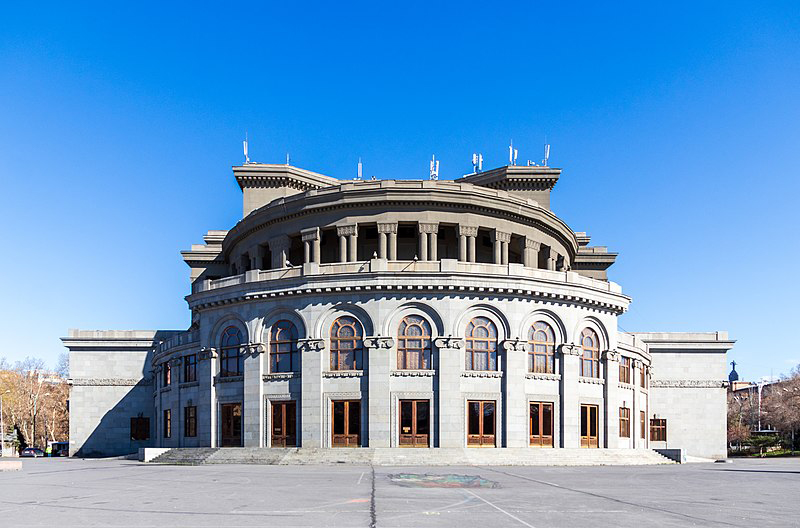 According to the general plan by A. Tamanyan for the development of Yerevan, the northern part of the capital was allocated for a student city. In this part of Yerevan, state universities are built. Yerevan State University (architect E. Tigranyan) is located very close (between Charents and Alek Manukyan streets).

The Sports and Concert Complex named after Karen Demirtchian is distinguished by its original architecture - a large building located on the Tsitsernakaberd hill.

The complex has two halls: a large one and a small one.
A total of 10 thousand spectators can be accommodated in the halls.
The spacious lobby, distinguished by the sophistication of the interior, can be used for various celebrations. Two flights of stairs lead to the main entrance to the complex, between which there is a cascade of fountains, which give the building a special solemnity. 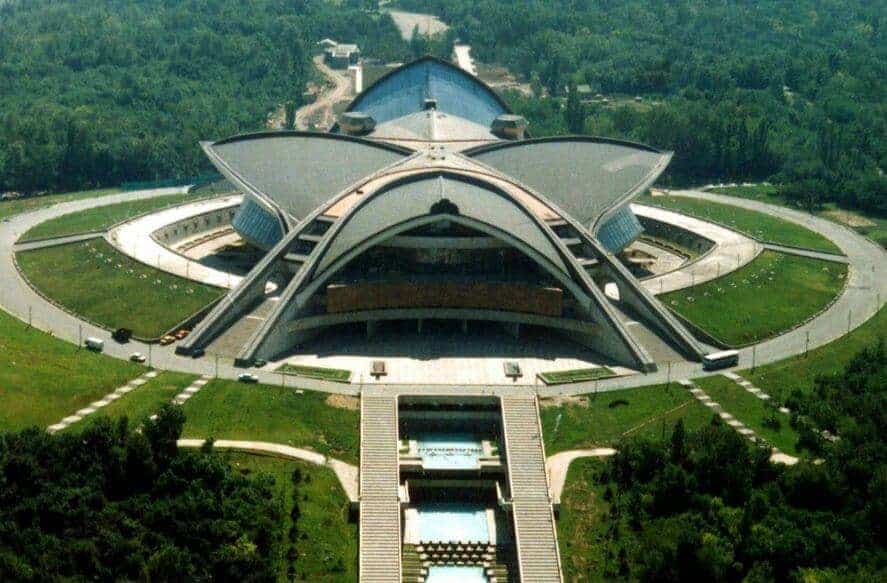 There are more than 4,000 monasteries and churches in Armenia, of which 16 churches are in Yerevan. In 2001 Armenia celebrated its 1700th Anniversary of Christianity. In 301 Armenia became the first nation in the world that officially adopted Christianity as the religion of the State. To commemorate this extremely important event of its history the people of Armenia constructed an impressive cathedral named after Gregory the Illuminator,  who became the first Catholicos and Supreme Patriarch of the Armenian Apostolic Church. 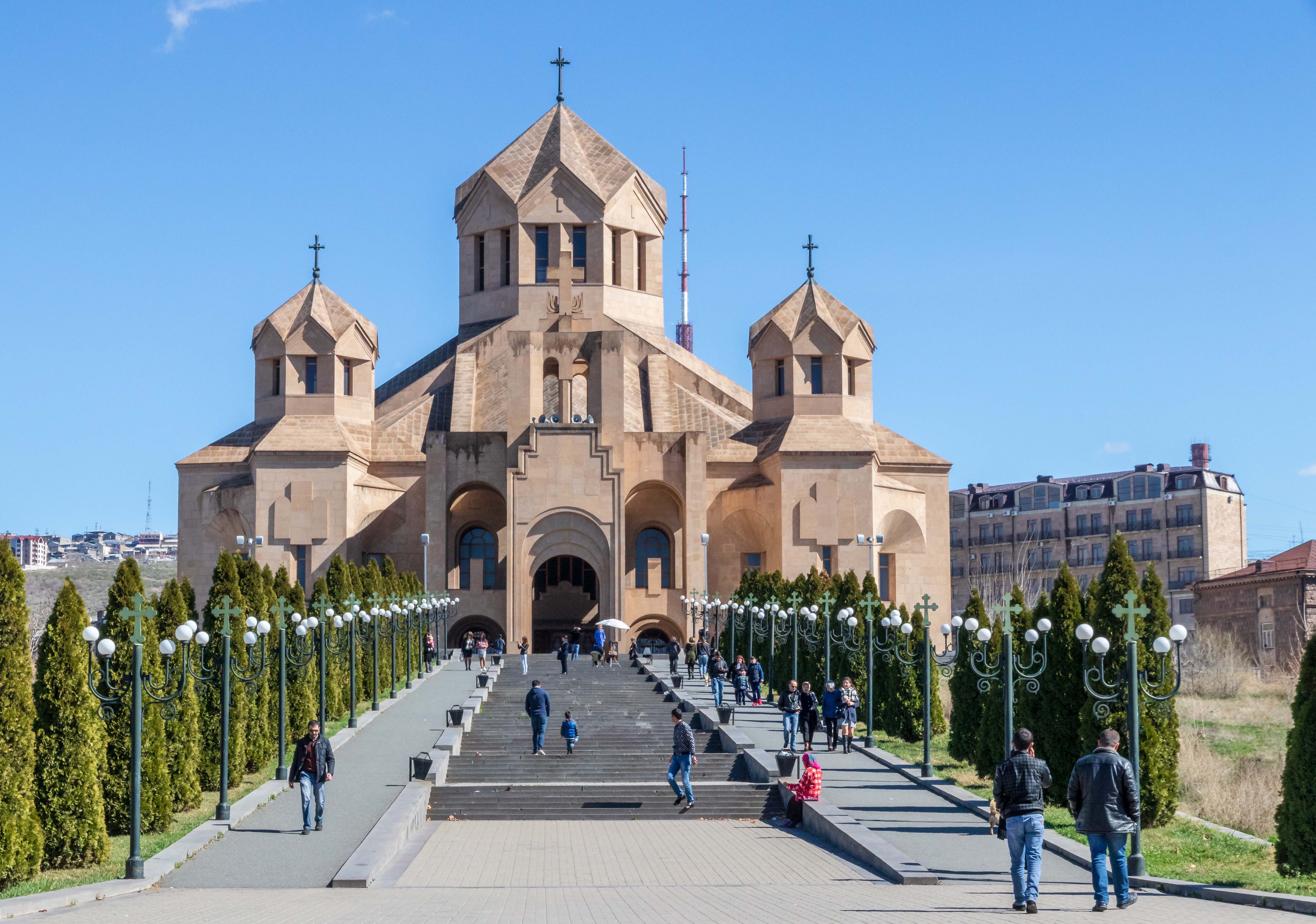 It is difficult to imagine the architectural appearance of the capital today without the ground pavilions of some stations of the Yerevan Metro. Of the stations located in the city center, the stations “Republic Square” and “Yeritasardakan” are distinguished. The ground part of the “Republic Square” station has two levels. The lower level is a cozy courtyard in front of the station entrance; in the center of the courtyard, there is a fountain, the jets of which reach the level of the upper platform. The ground pavilion of the Yeritasardakan station is distinguished by the originality of the solution. An inclined escalator tunnel through the station lobby comes to the surface in the form of a wide pipe aimed at the sky, ending with a large lantern. This pipe gives dynamism to the whole structure.

The museum complex is located in Republic Square.

The History Museum of Armenia is the oldest museum institution in Armenia, founded in 1921. The permanent exhibition covers the entire history of the Armenian people - from the time of primitive society to the present day. The objects of material culture, revealed during excavations of monuments of different eras are presented. These are the tools of primitive man, weapons and utensils from the times of Urartu and other Armenian kingdoms, sculptures, jewelry, handicraft products from various historical regions of Armenia. In the halls dedicated to the new and recent history of Armenia, documents, samples of industrial products, various materials related to state building, socio-economic and cultural development of Armenia are presented. The main advantage of the exposition is the prevalence of genuine items. The museum also organizes thematic exhibitions dedicated to significant dates in the history and culture of Armenia.

The Tower of the complex is the National Art Gallery. The exclusively rich collection of paintings are made by famous Armenian, French, Dutch, Italian, German and Russian artists. 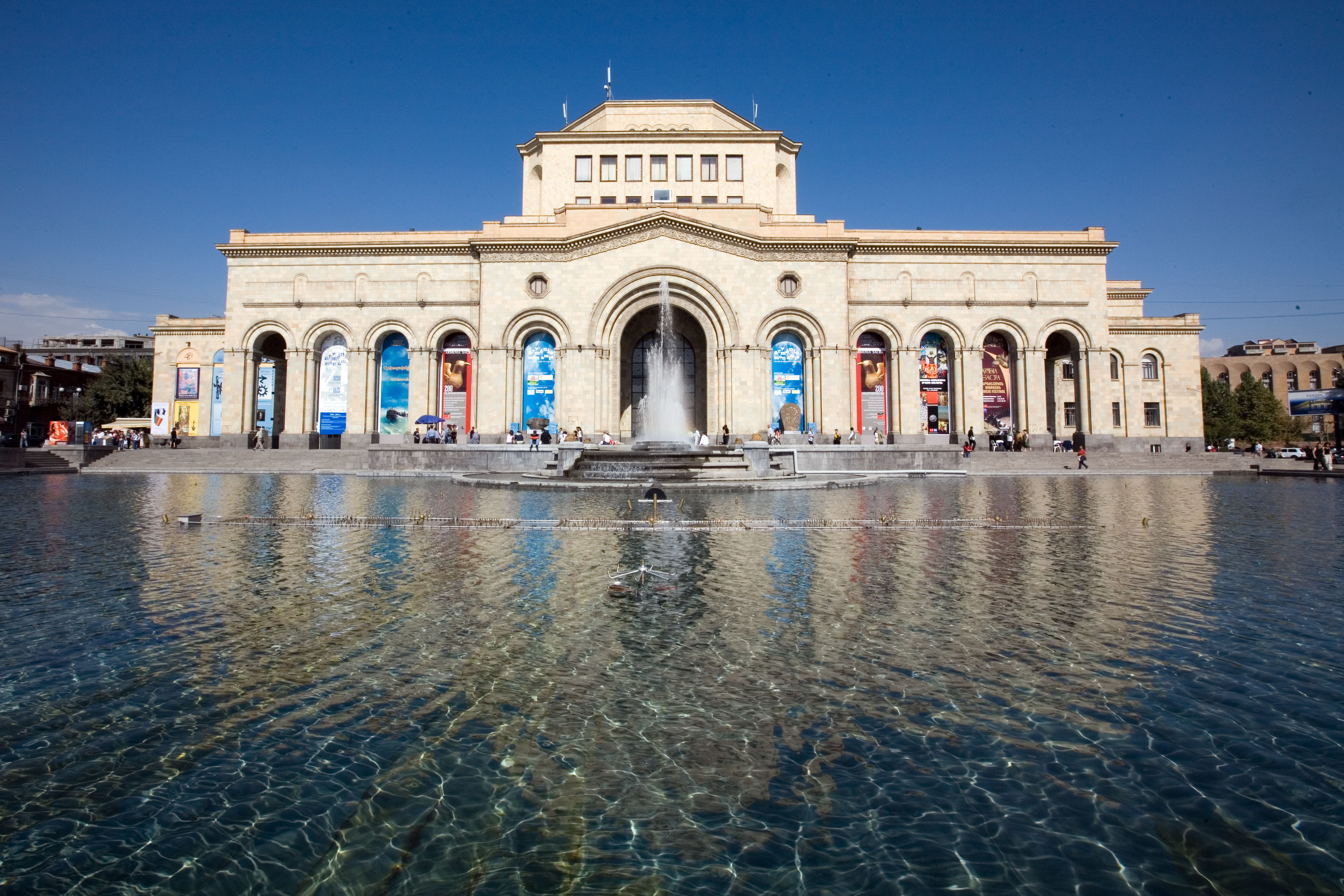 Museum “Erebuni” is a museum of the history of the founding of the city of Yerevan. It was built in 1968 in the southeastern part of the capital, at the foot of the Arin-Berd hill, at the top of which was the Urartian fortress Erebuni. The museum is an integral part of the museum-reserve, which, in addition to Arin-Berd, also includes the archaeological sites of Karmir-Blur and Shengavit. The Erebuni Museum displays exhibits related to the Urartu era: weapons, armor, samples of cuneiform writing. After visiting the museum, guests can also go to the top of the hill and observe the restored fragments of the Erebuni fortress.

Matenadaran, the Research Institute of Ancient Manuscripts, has a permanent exhibition. Visiting The magnificent building of Matenadaran, you will get acquainted with the richest manuscript heritage of the Armenian people. The exposition presents fragments of ancient manuscripts of the 5th-6th centuries, manuscripts of the Middle Ages of various contents: Bibles, historical works, theological and philosophical treatises, works on natural sciences, etc. The exposition allows one to evaluate the skill of Armenian miniaturists who have created wonderful examples of book miniatures. A monument to the creator of the Armenian alphabet St. Mesrop Mashtots is erected in front of the Matenadaran building. On both sides of the main entrance, there are sculptural figures of prominent figures of medieval Armenian culture - historian Movses Khorenatsi, mathematician Anania Shirakatsi, poet Frick, lawyer Mkhitar Gosh, philosopher Grigor Tatevatsi, artist Toros Roslin. Inside the building, attention is drawn to the mosaic panels and frescoes on the history of Armenia, the author of which is the monumental artist Van Khachatur. 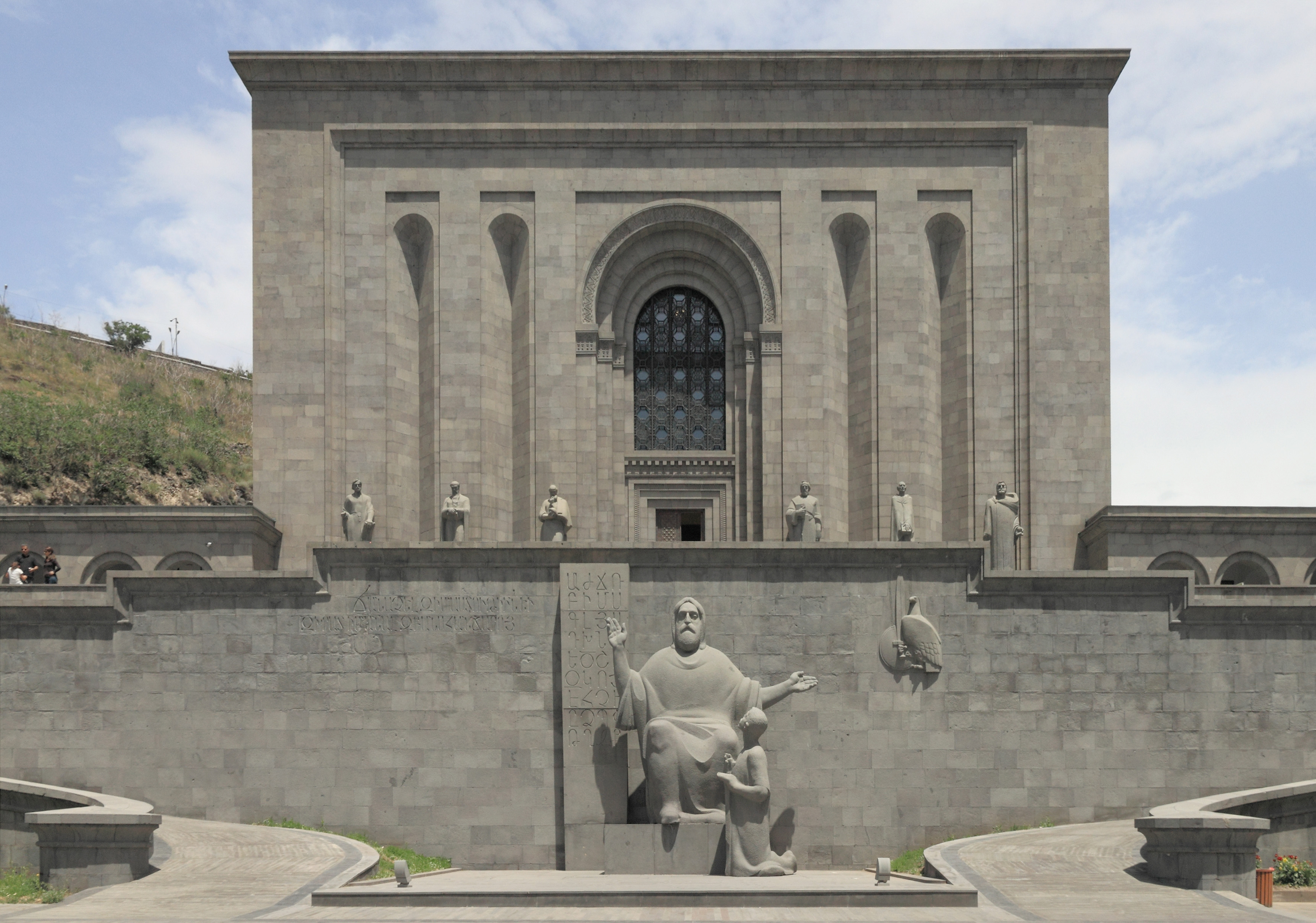 The Memorial-Architectural Complex “Armenia” (better known as “Cascade”) is at the final stage of construction. Guests of Yerevan will undoubtedly pay attention to this original structure, visible from many points of the capital. 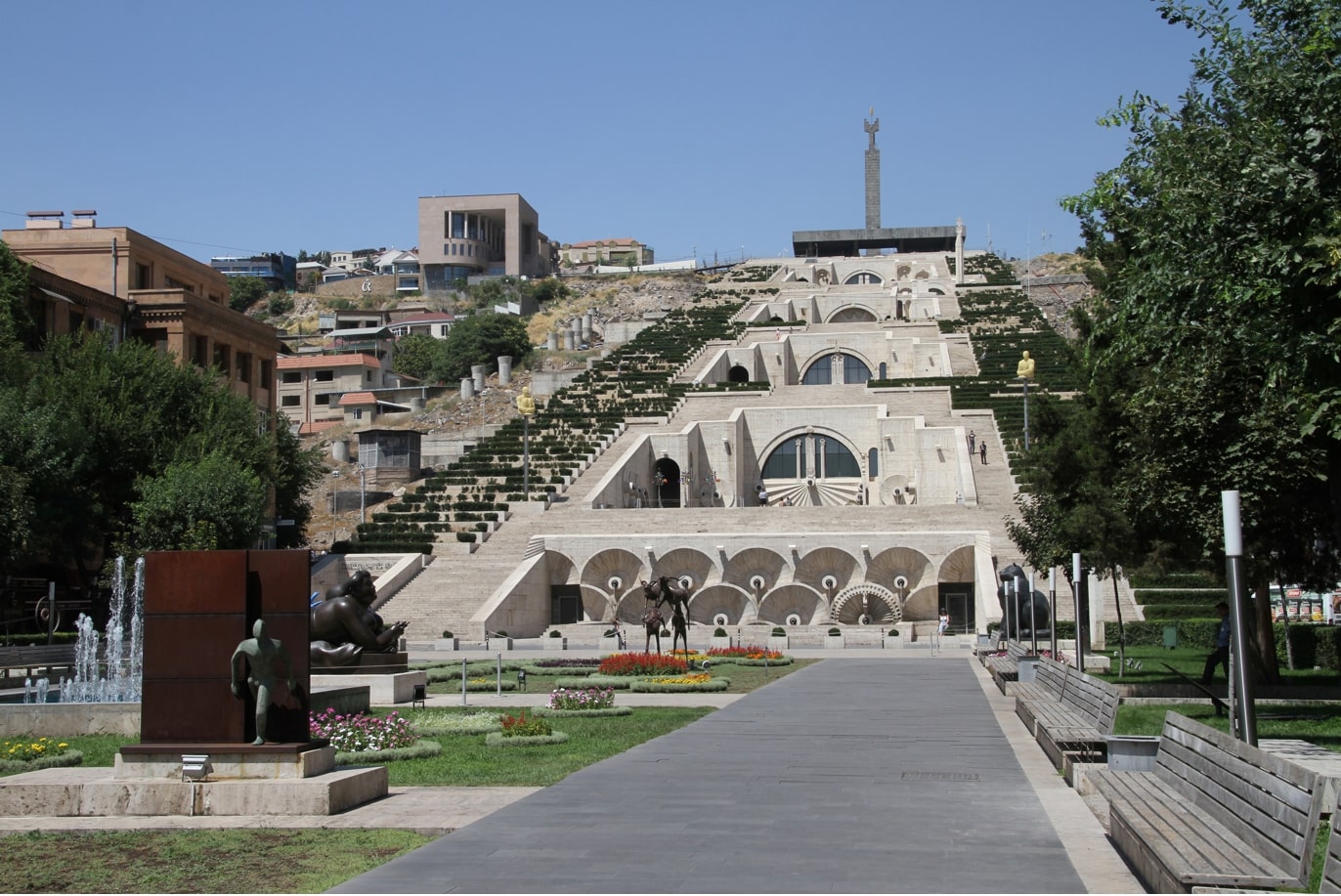 Khachkars, statues, monument springs, decorative figures, steles can be found in parks, on boulevards, just on the sidewalks of city streets. In addition to them, there are springs - monuments erected by individual families in memory of their deceased relatives. In their totality, architectural monuments of small form adorn Yerevan, giving it a peculiar flavor.